What is Serial ATA (SATA) Connector?

Serial ATA (SATA) is the SATA-IO standard interface for storage devices connected to consumer devices. SATA connectors are widely used in PC, SSD, server, and network storage systems because of their excellent sensitivity in data transfer speed and compatibility with any other connector family.

Serial ATA, on the other hand, provides higher data transfer rates and uses smaller cables and connectors. At the same time, the voltage signal used for internal storage is also lower.

SATA was launched in 2001 by Intel, IBM, DELL, APT, Maxtor, and Seagate, companies that, as far as the serial interface technology is concerned, offer the advantages of reduced cables, increased data throughput, and improved crosstalk and impedance matching issues.

With a strong push from chip and connector manufacturers and driven by increasing storage capacity, SATA replaced the parallel ATA bus to meet the growing bandwidth and performance demands of hard disk drive HDD storage applications.

SATA plugs are typically used in HDD and SSD modules, and female connectors are used in device host boards or cable assemblies.

The highest possible data transfer rate has closely been the core issue of connector development. SATA connectors are no exception. In addition, many connector manufacturers are very concerned about the trend.

How to expand various heights and orientations on the SATA connector to meet the mechanical requirements of other standard features.

How to make SATA connectors with hot-swappable function point-to-point links into various insertion modes to save PCB space.

Size is also a rather important part of the development and miniaturization of SATA connectors to have more opportunities to integrate into more hardware architectures.

The most used interface is SATA 3.0. Theoretically, the transmission bandwidth of SATA 3.0 is at 6Gbps. However, it looks much worse than the new interface's bandwidth of 10Gbps or even 24Gbps, but ordinary SSDs and HDDs would not have had such a high demand to meet the transmission needs of reading and writing speed sufficient.

MSATA is a mini version of the standard SATA, the same physical interface type as the mini PCIe interface. M.2 is the new interface specification to replace MSATA in terms of size and volume and is a natural transition from mini and semi-mini cards to a smaller form factor.

This type of interface is a typical representative of space saving and has a wide application space in the future of slim devices.

SATA connector market ranking of the top five manufacturers are Amphenol, TE, Molex, Foxconn, and 3M. According to QYResearch research data, the shipments of these top five manufacturers occupy half of the global market, in a leading position. There are also many other manufacturers shipping a lot, such as Smiths, JAE, Kyocera, UTE, ACES, and so on, and the price difference between different brands has been shrinking in recent years.

Amphenol's expansion in recent years can be seen in the continued strategic outbound mergers and acquisitions is still very obvious. In consumer electronics, cutting-edge interconnect solutions feature is very prominent. 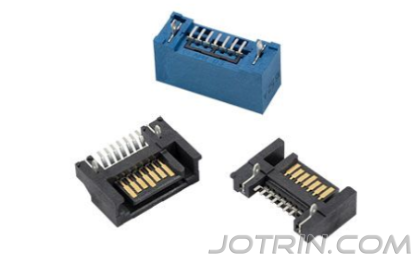 Amphenol SATA connectors use differential signals to extend data transfer rates from 1.5Gb/s to 12Gb/s and offer terminal contacts from 7 to 22 positions, multiple plating options, and a variety of consumer application requirements that are essentially fully met.

To enhance reliability, the pressed clamp on the SATA connector acts as a retainer to strengthen the PCB connection, providing additional mechanical strength after soldering. By providing angled leads, molded guide posts can help with mating for self-alignment, allowing the connector to achieve misalignment compensation.

As an active member of the SATA-IO group, TE can offer a wide range of SATA and miniature SATA connectors with an extensive product portfolio that includes a wide range of different heights, orientations, and other standard features for right-angle and vertical PCB mounting orientations and different location criteria.

Adapting various connections requires TE's SATA connectors to handle well if only to expand the contact range, which is not enough. TE in vertical or right angle configuration socket height continues to do the expansion, such as the height from 8.15 mm to 34 mm. This configuration expansion provides the possibility of replacing the flexible cable.

Another very characteristic point in PCB space-saving, TE in this piece of fine work, to its official website best-selling 7P + 15P series, for example, the series in the structure of 1 row 2 port mode of vertical installation PCB, in the terminal bonding area, the thickness of the plating material to .38 µm, the centerline spacing of the shell does not exceed 1.27mm.

This greatly space-saving design and the process can also achieve a fairly reliable physical strength as long as the material's thermoplasticity is guaranteed. The miniaturized SATA connector also offers more opportunities for integration into other hardware architectures.

Molex is also an active member of SATA-IO, with a strong market presence in the host system and SSD, CD-ROM drive, hard disk drive, and removable magnetic media device markets, and its SATA interconnect products include external, combo, miniature, and Slimline connectors, as well as corresponding mains, power and signal connection cable assemblies.

Molex is more interested in the miniaturization of SATA connectors than in transmission rates.

The next step in Molex's planning for SATA connectors is to keep the existing Micro SATA connector form factor the same and design SATA 6Gbps into future hardware architectures while minimizing infrastructure changes and costs, wanting to compete in the next generation of storage applications with miniaturization and cost advantages.

Speed enhancement is no longer the only focus for SATA connectors that have been developed for so many years. After all, there is already an upper limit. How to give full play to the low cost of SATA connectors has become the advantage of SATA in storage applications.

From the SATA connector industry development trend, miniaturization is now the focus of SATA connectors, how to further achieve a more compact form factor; each manufacturer has its characteristic features.

Overall, in a situation where the price difference between different brands is shrinking, how to minimize infrastructure changes and costs while integrating SATA connectors into more hardware architectures is the key to SATA connector manufacturers being able to maintain their market share in next-generation storage applications.

前: What is a Microcontroller (MCU)?